Little things can cost a lot

Ah, you would need to think laterally to get the video from that title, but its worth going on, I’ve found a real vintage gem for you tonight.

So, lets have a little sport tonight, for a change, shall we? If anyone offered a leading golfer a hole, just over 120 yards long, as a par 3 hole, they’d think piece of cake, and be thinking of getting a birdie, or so you’d think? But yet, this humble sounding little hole, gives golfers nervous nights, just thinking about it. Why, because this week, they are playing at Sawgrass, and we’re talking about that infamous 17th hole.

Yes, thats the one, a small island green, surrounded by water, which seems to attract golf balls, as if they were on magnets! I cant imagine there are many top golfers, who at some time, havent dumped at least 1 ball into that watery grave. If I remember rightly, many years ago, someone kept dumping balls into the water, and took 13 shots in all (including lots of penalty shots) before completing the hole.

I could brag that I’ve had a hole in one at that infamous hole, and be telling the truth. Oh fine, its a kind of cheat, as that was on the Tiger Woods golf game for computers, created around 2003. Yes, fine, I also dumped a few balls in the water, too.

But yes, I have no idea what standing on that tee, looking at all that water, and that tiny green is like, but it would be terrifying for me. I know these professionals are far better golfers than me, but anyway…eek! But yes, its going to be fun watching the best golfers attempting to land golf balls, on that tiny little green, and not into the water over the next 4 days.

Right, the video. Any British readers here, will probably know the AXA Medical advert on TV by now, I’m sure. What many may not have realised, is that just over 60 years ago, this song topped the British Charts. And yes, amazingly, I’ve found a video of that original song, from 1955! Fine, the quality isnt great, hardly surprising really, after all these years, but, readers, let me introduce you to Kitty Kallen

Right, fine, as my readers probably know, I’m a bit of a 30’s baby at heart. When it came to beauty gadgets back then, some of them look terrifying to modern eyes, and you could say this was one of them. Before the late 30’s, if you wanted your hair permed, this was your way of getting it done! 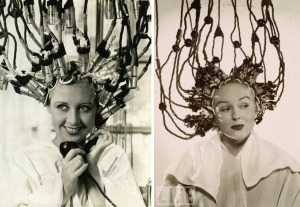 Yes, fine, once, and only once, I’d love to have my hair curled, as close to that method as is now possible. If anyone reads this, and feels up to the challenge, shout with a comment!

When it comes to sports I enjoy watching, golf would be in the plus zone, if not as high as obvious ones as cricket. But what happens with golf, is that every so often, something very unique jumps out at you. This week, at Sawgrass, has just one of those holes, the 17th.

Some of you already know what I mean, but for the rest of you…this hole is only about 140 yards long, but…between the tee and the green, pretty much just water! Well there is a narrow strip of land (would be harsh if the golfers had to swim to the green lol!), but that is pretty irrelevant. You look out, you see water, and a tiny green.

I know, its a bit perverse watching the top golfers in the world making idiots of themselves occasionally, but hey, its fun!

The funny thing is, I can claim to have played Sawgrass many times, and indeed have a decent record at the 17th, but only in a cyber sense. Many years ago, when I had a lot more spare time than now, I used to buy the odd PC game, one of which was an early version of the Tiger Woods game, which yes, featured Sawgrass as one of its courses. To be honest, I’m no real gamer, and I did buy a later version, but didnt like it as much. Most like complexities and challenges from gaming, I just enjoyed having some fun. And nowadays, I havent bought any games in about 6 or 7 years. And the irony is, those early games wouldnt even run on modern computers, they would be far too basic for that!

But it has to be said, even on a computer game, standing on that tee was quite a challenge, especially if the ‘game’ decided that the wind was blowing ‘a bit’! But yes, a good shot was extra special when I did hit it. The one other hole I remeber fondly from that game was the very short par 4 at River Highlands, where on the game you were able to reach the green with a driver, and yes, in cyber golf terms at least, I hit an albatross/hole in one there, but it is the only way I ever would have done.

While talking of golf, here’s an irony for you. When Tiger Woods was nigh invincible, I always wanted someone to come through and beat him. Nowadays, he seems a lot more human, and here I am, on Friday evening (my time) hoping that he makes the cut this weekend! Crazy, or what? I know, he’s human, and certainly proved that of late, in more senses than one. But it didnt always feel that way, it has to be said lol!

Want to see what I mean about this hole? Check out the video then.